History has always fascinated me since childhood. Hence any place that brings the history alive holds a special spot in my mind. One such place is Hampi. Located at the banks of Tungabhadra river of Hospet taluka, Bellari district, Karnataka India, this ancient town is nothing sort of living literature of the Vijayanagara Empire that once flourished in this region.

Brief History: Going beyond Vijayanagara empire, Hampi is believed to be the ancient “Kishkinda” of Ramayana times where the Vanar Samrajya (Monkey Kingdom) existed. Then somewhere between 1336-1342 AD the Vijayanagara Empire was established by the Sangama brothers. Hampi was the capital of the same. Over the time, this developed into a formidable Hindu empire under the rules of various capable rulers. Its political boundary during its peak days extended up to river Krishna in the north and Indian Ocean in the south. Wary of its power and wealth, the Sultanates of Deccan planned an attack on this Kingdom and the battle of Talikota lead to the kingdom’s fall in 1565 AD. During this attack most of the monuments which had religious or political importance were broken down to pieces, and this proved to be beginning of the end of this empire which reached new heights during its hey days.

Today, the ruins of the magnificent capital city can be experienced through the remains of more than 200 monuments spread across 26 square kilometers. Each remains of which have a story to tell of the glorious past it has witnessed. One of these monuments is Virupaksha temple, which is of huge religious importance even today.

Virupaksha Temple: The Virupaksha (aka Pampapati)temple is the most sacred living temple of Hampi. The temple, originally a small shrine, was expanded into a vast complex during 16th century AD. The main sanctum of this temple houses Shivalinga known as Virupaksha which attracts lots of religious tourists even today. The most outstanding vestige of this temple is the ceiling paintings of Vijayanagara in the ranga mandapa which depicts notable events from Ramayana. It also shows events like procession of sage Vidyaranya, Dikpalakas, and the ten incarnation of lord Vishnu, Girija Kalyana, Kalyana Sundara, Arjuna piercing the matsyayantra and Shiva as Tripurari.

The following images captured by me during my visit to Hampi in 2017, brings you part of the brilliance that describes this holy monument. 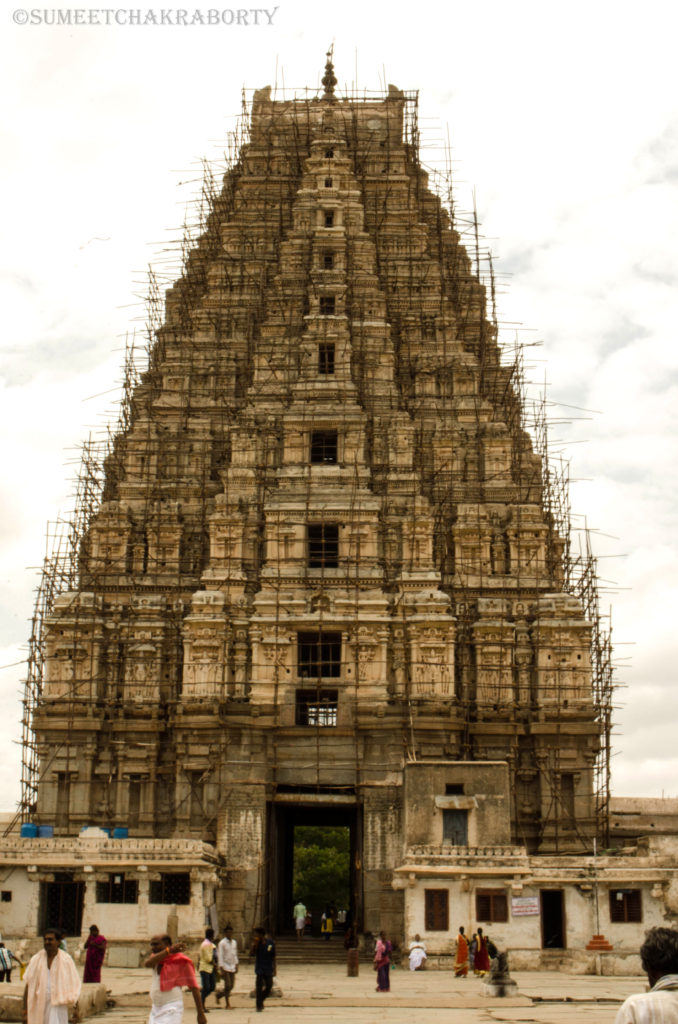 The eastern entrance, which is the main entrance of Virupaksha Temple. This was under maintenance during my visit. 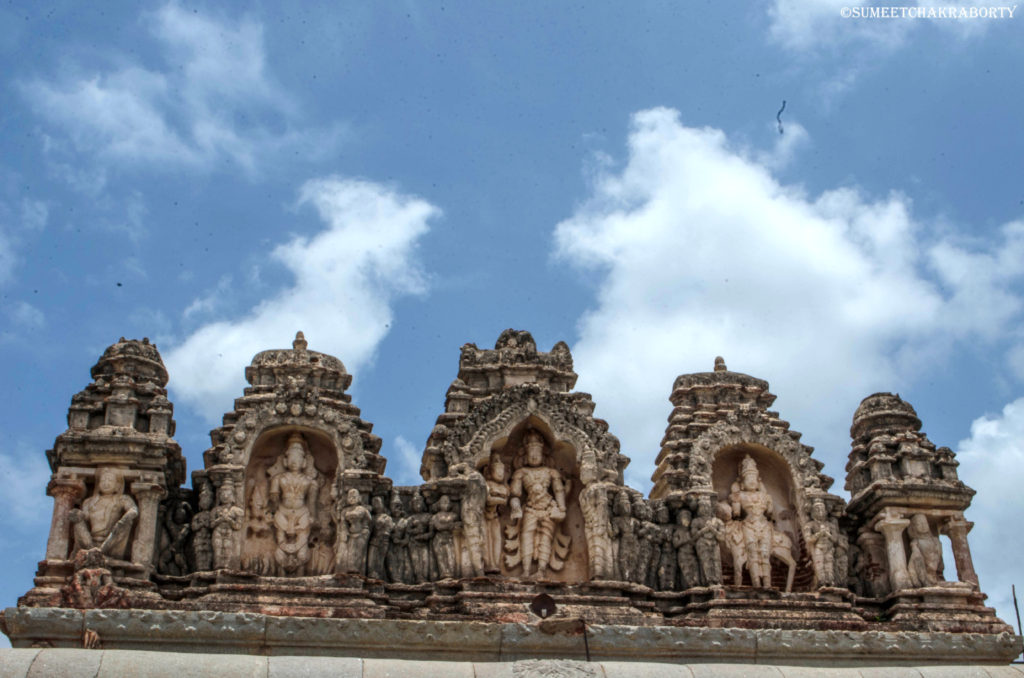 The shrine of the main sanctum showcasing Hindu gods – Brahma, Vishnu and Mahesh. 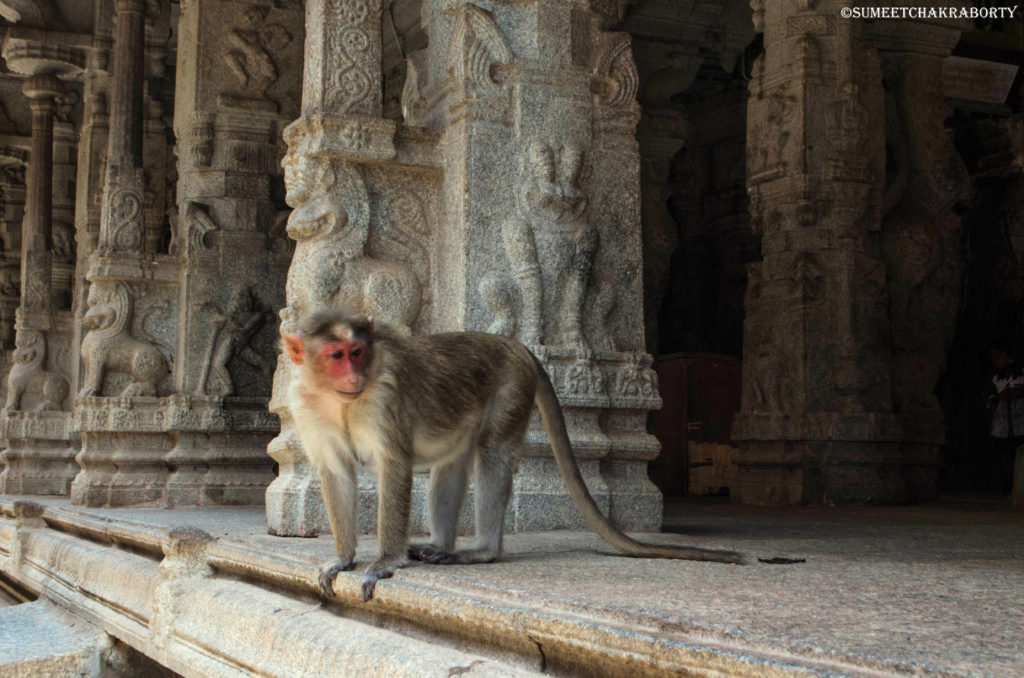 These visitors are always welcomed in the temple as Hampi is known as the ancient Kishkinda, the monkey kingdom. 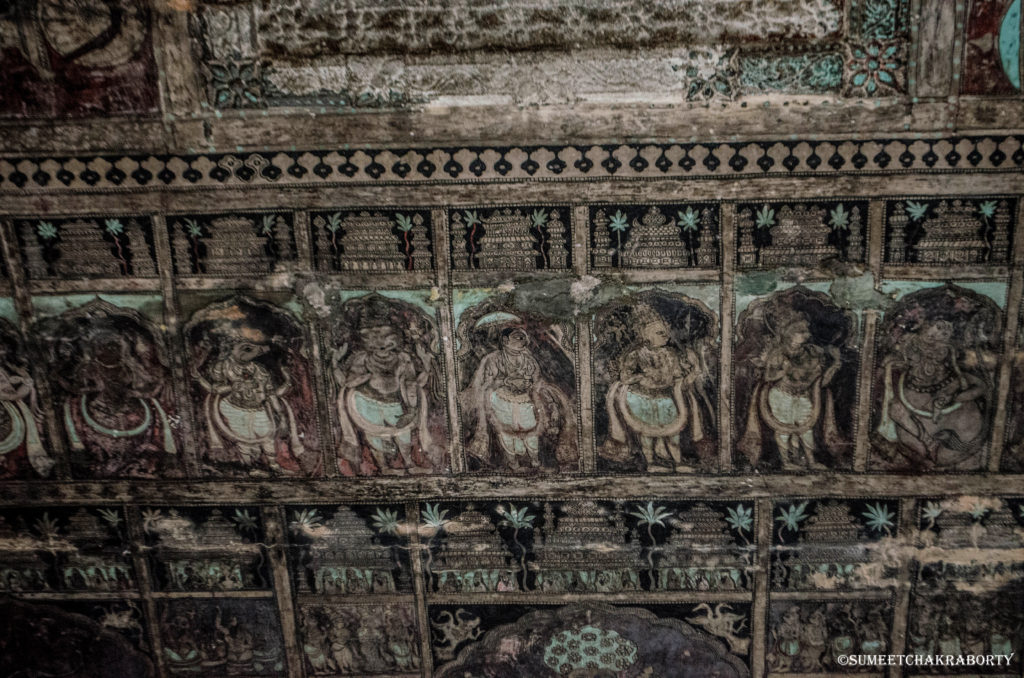 The paintings on the ceiling. 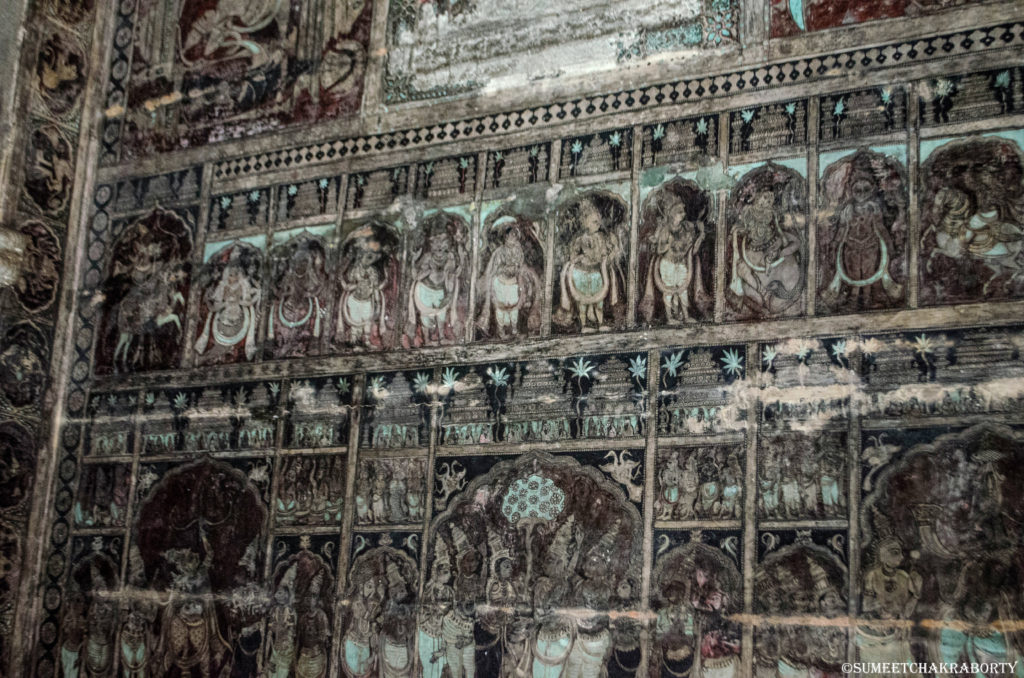 The paintings on the ceiling 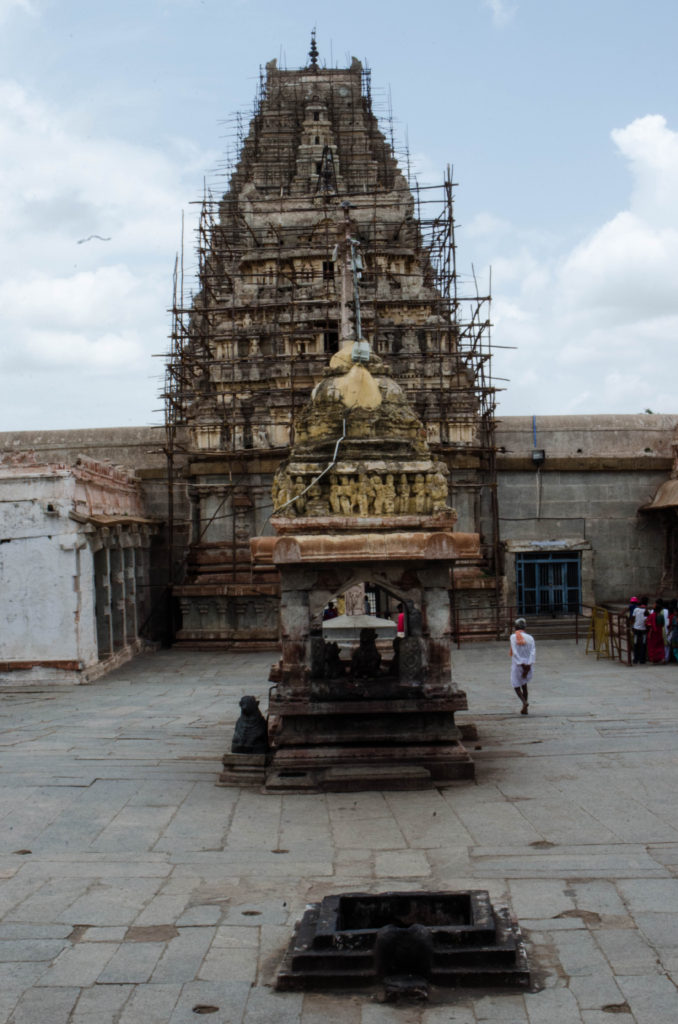 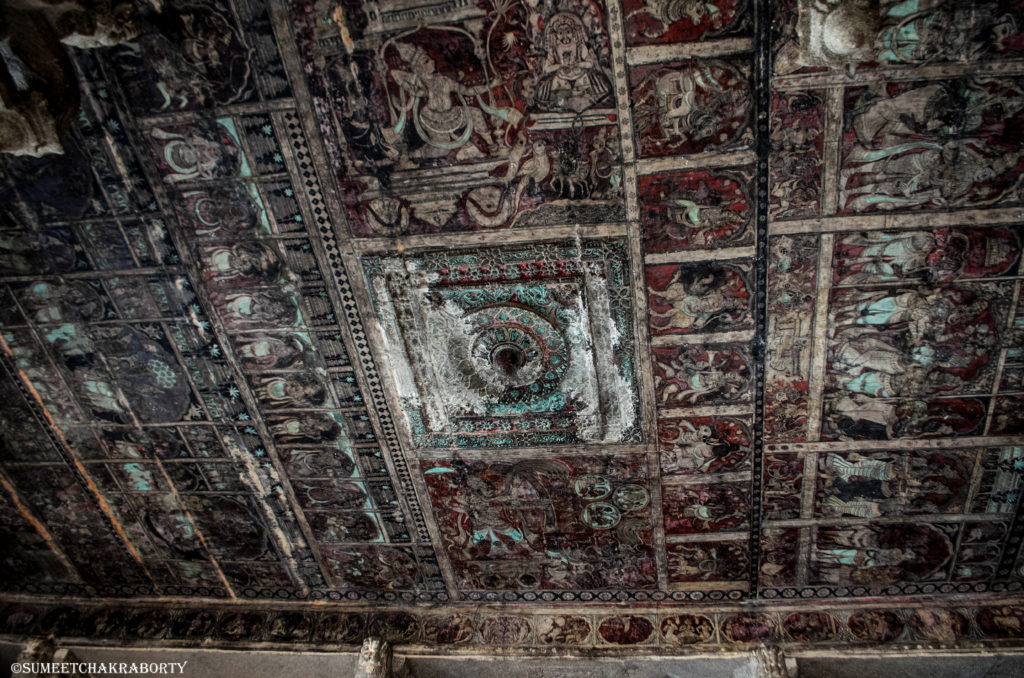 The ceiling .. depicting some notable events from Ramayana 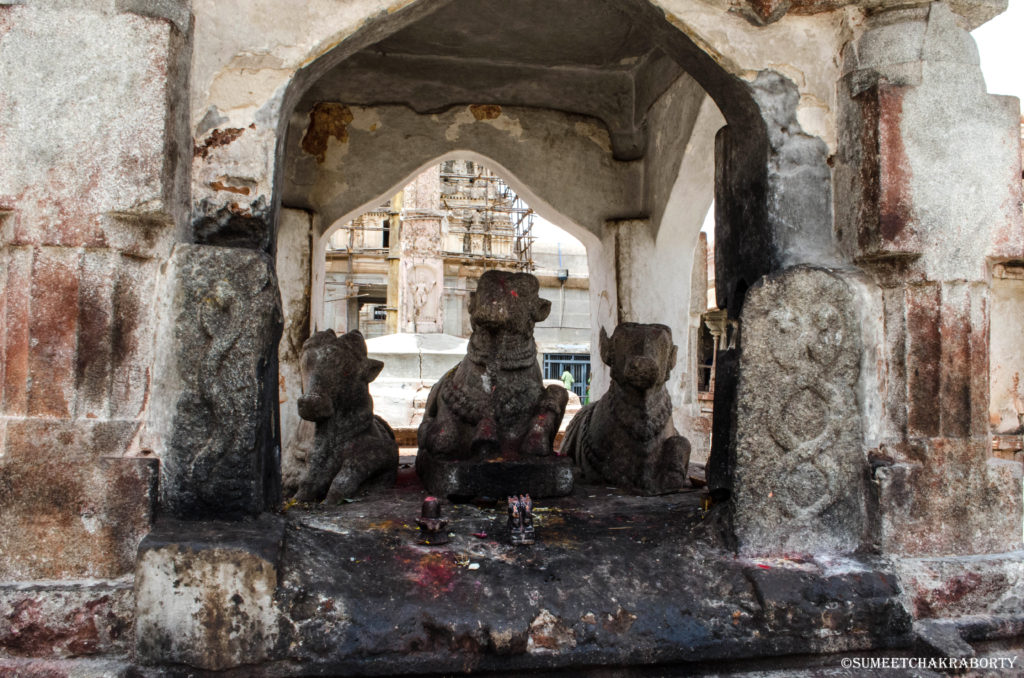 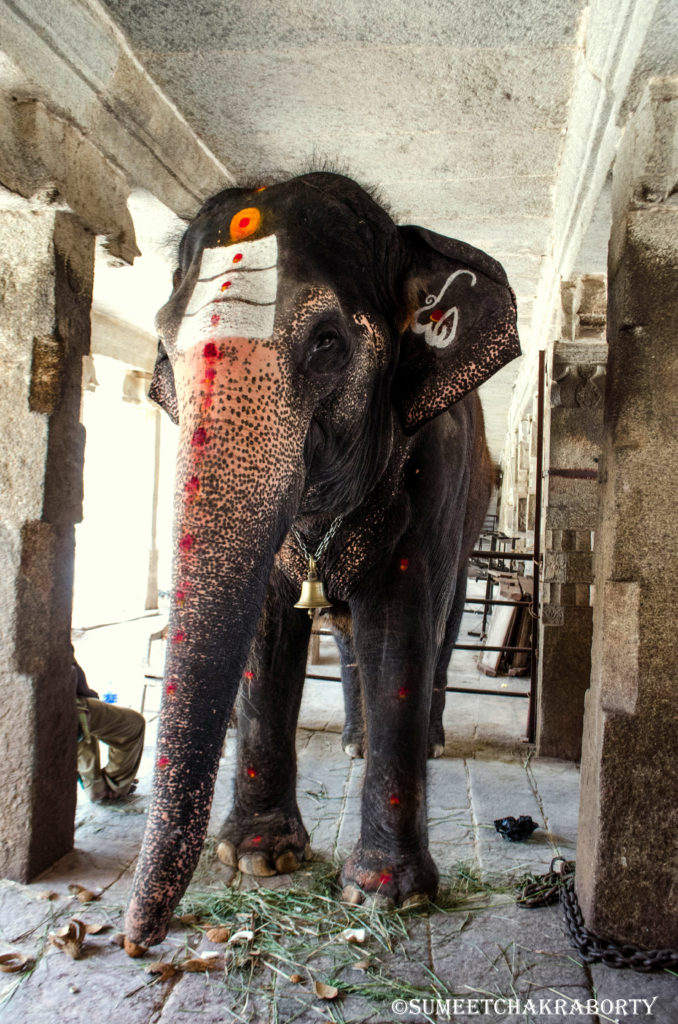 Lakhsmi, the holy Elephant of the temple. You can seek her blessings as well, and exactly the reason why she is famous with tourists. She provides good photography opportunity with her while she raises her trunk to bless us. 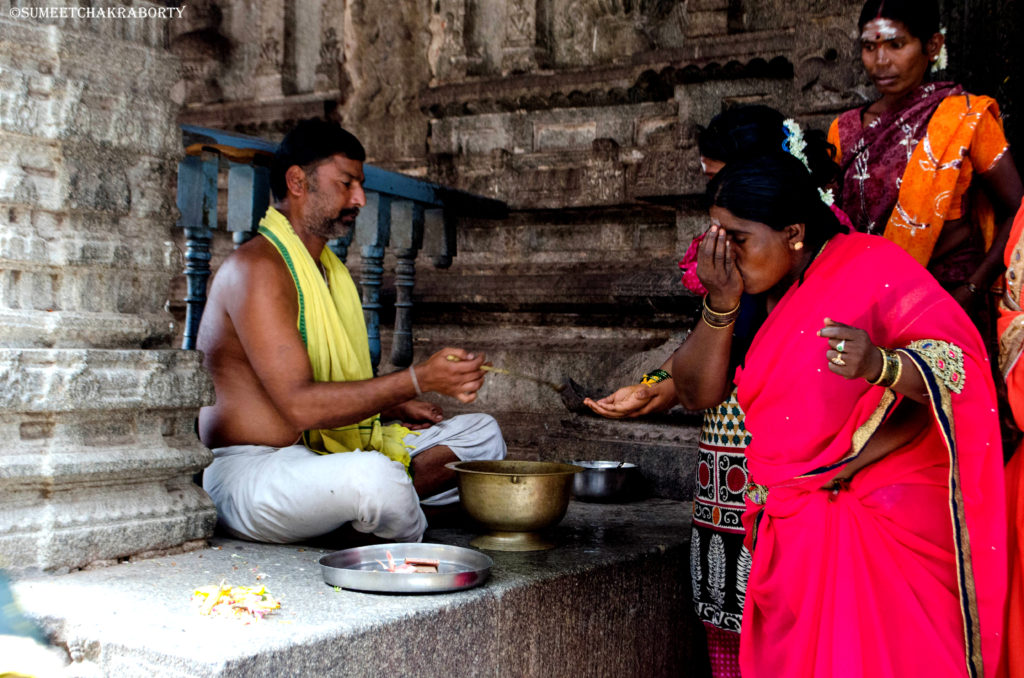 The priest offering Parasad and Holy water to devotees. 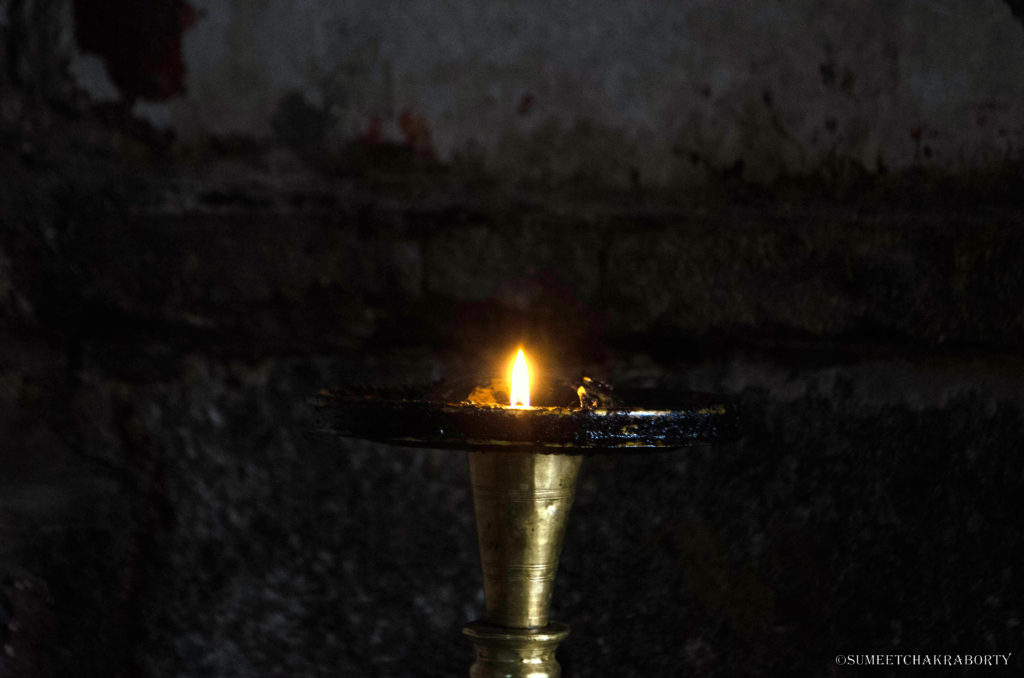 The akhand diya inside the temple, which is enlightened 24*7 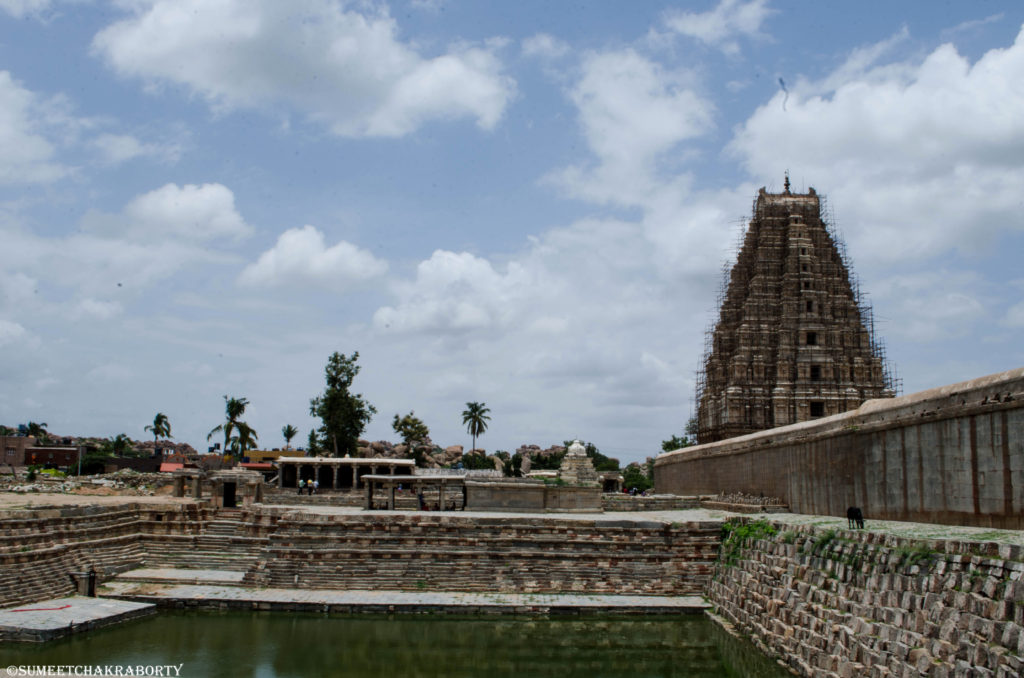 The Manmatha Tank inside the temple 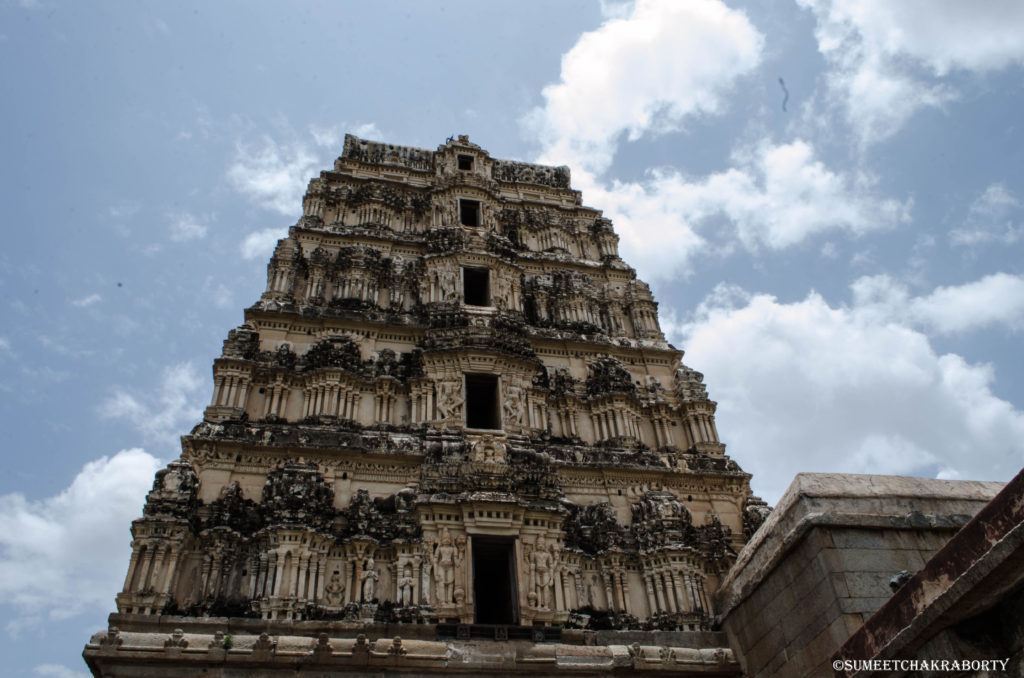 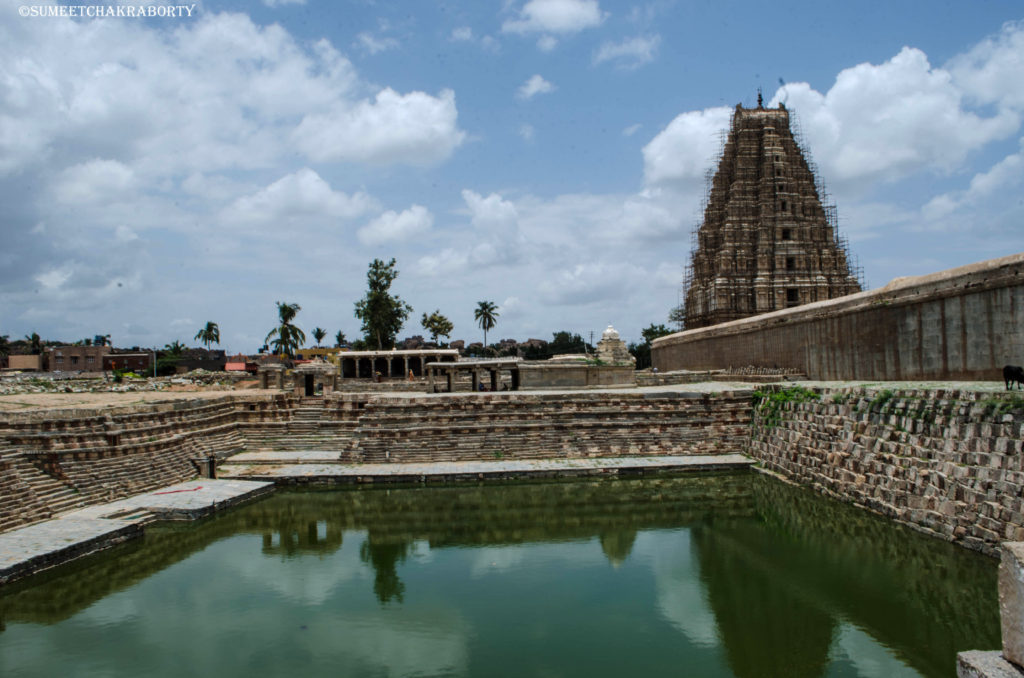 Another view of the Manmatha tank 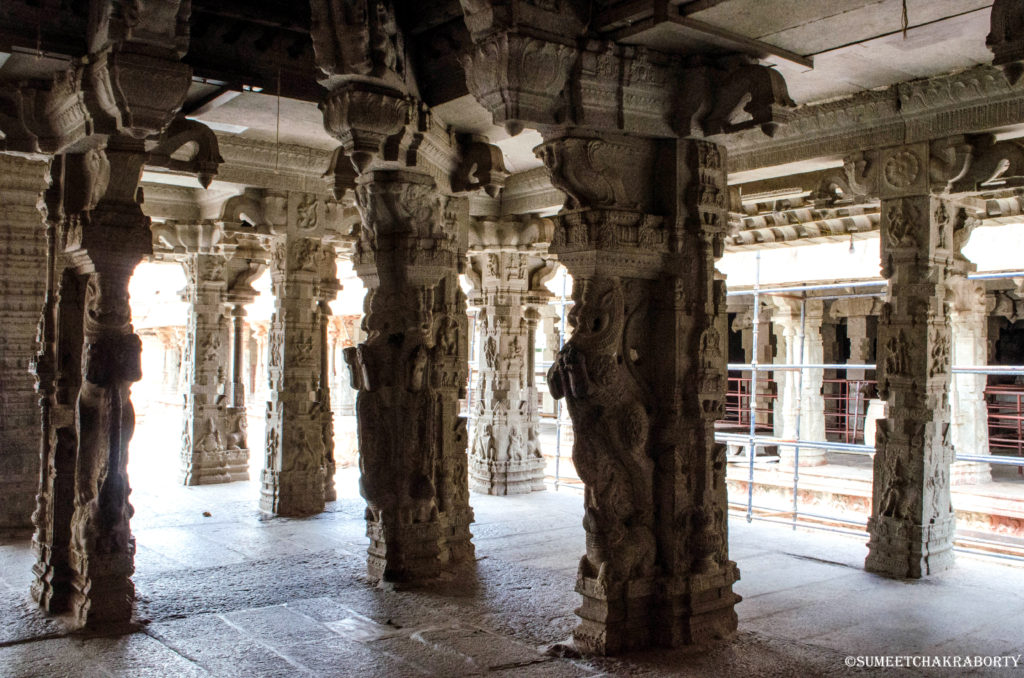 The beautiful artworks on the pillars of Virupaksha Temple are truly worth capturing. 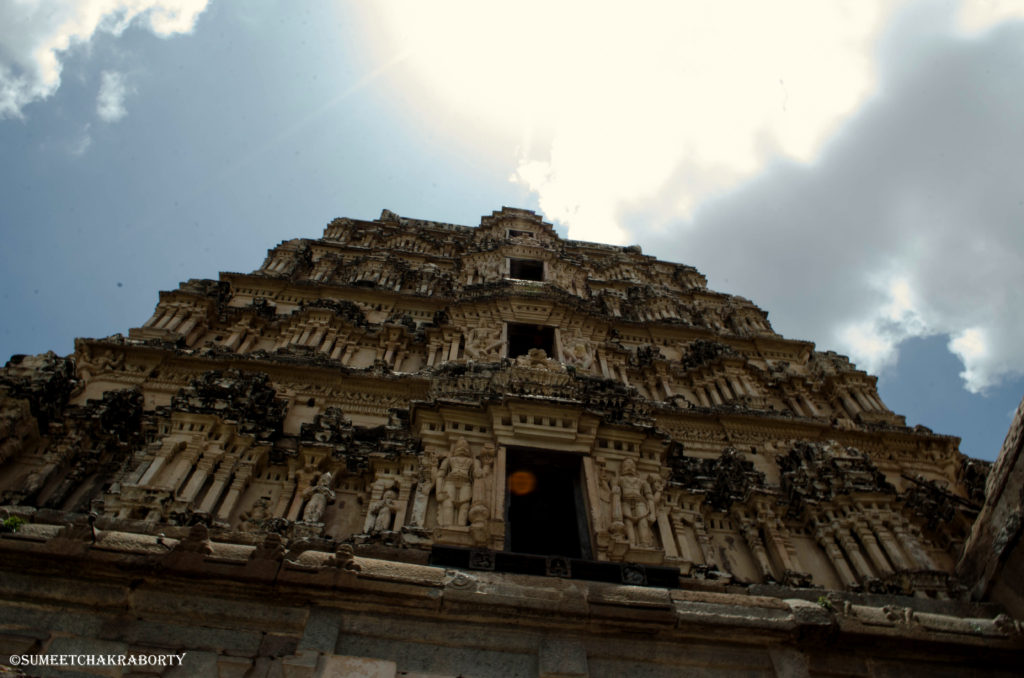 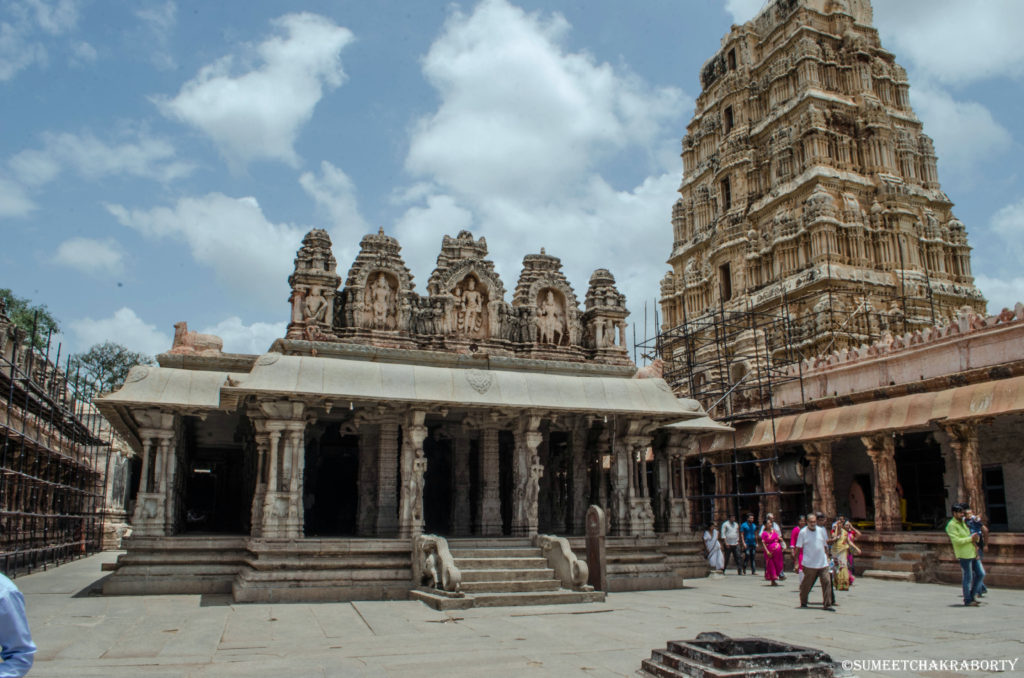 The entrance of the main sanctum.

A write-up by : Sumeet Chakraborty

3 thoughts on “Virupaksha Temple – The living glory of Hampi” 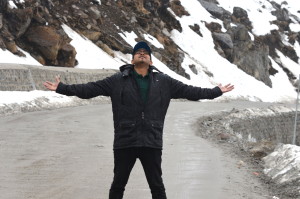 Welcome Folks! Click on the image to know more about me and Travelarge.